A Ride up to Mineral Basin—American Fork Canyon 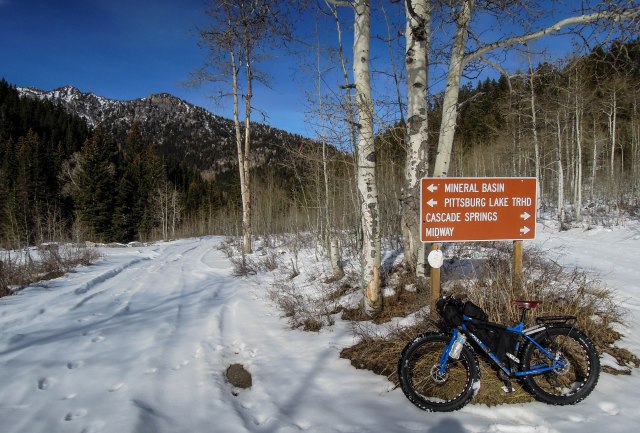 A ride report by the Professor.

I went for a ride today up American Fork Canyon, looking for snow. I missed the last group ride in the snow because I was out of town on business. I also enjoy riding solo—lots of time to think. I drove up to Tibble Fork Reservoir and started my ride there. It was a pretty warm day, probably in the mid 30’s when I started at 12:15. The road was wet and muddy to begin, then alternated between mud and patches of snow. After about a mile I shed my soft shell and gloves. I didn’t even wear an ear band or hat under my helmet. The climb is gradual up this canyon with a nice stream alongside the road. 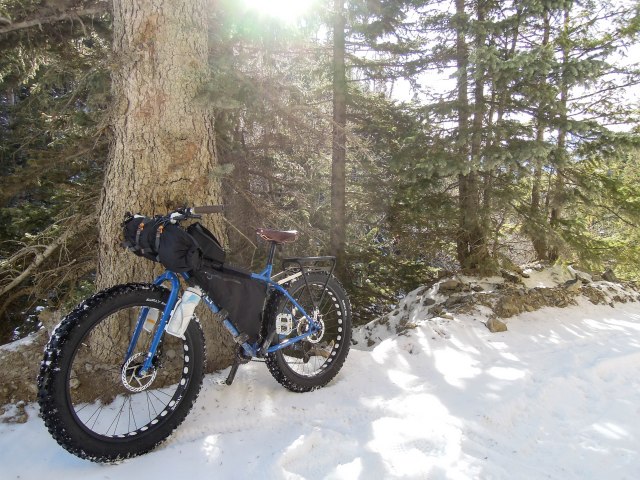 Lower in the canyon.

The higher I got the more snow there was. By the time I got to Dutchman’s Flat it was all snow, and getting deeper. At this point a couple people on snowshoes had tramped out the trail a bit. This also made for a bumpy ride, but it was easier than breaking trail. The snowshoe tracks ended at the sign to Mineral Basin. Before I left I thought I might be able to make it all the way up to Pittsburg Lake, or at least to the trailhead. 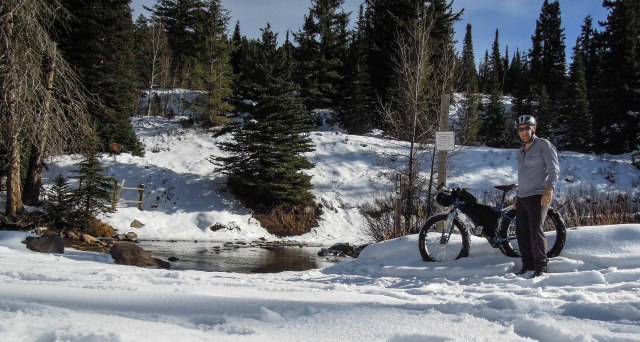 At the junction of Shaffer Fork 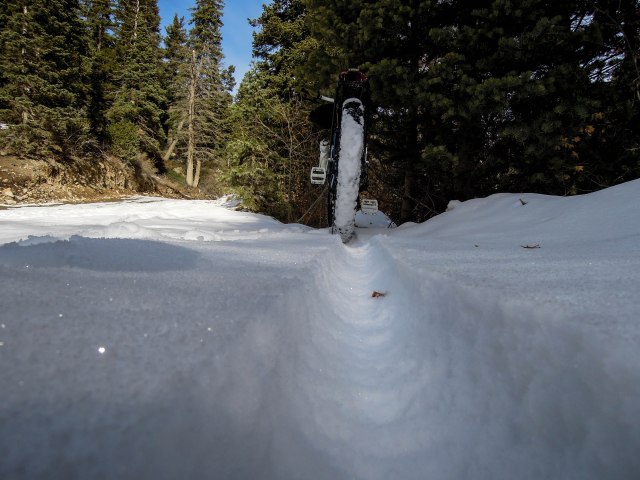 Just this morning I signed up for a 50K fat bike race in Idaho, so I decided to pack a little extra gear and see how that would affect the bike (didn’t seem to, except it was heavier). I wanted to experiment with a dry bag strapped to my handlebars. So I put a puffy coat and and extra pair of heavier gloves in the dry bag and simply strapped it to my handlebars. I also had a bunch of stuff in my frame bag as well as a new Revelate Designs Gas Tank on the top tube. I really like the Gas Tank. It has about twice the capacity as the small Serius bag that I had been using. I could easily fit my point and shoot camera, iPhone, head band, and two energy bars, with room to spare. I’ll do review of it later. 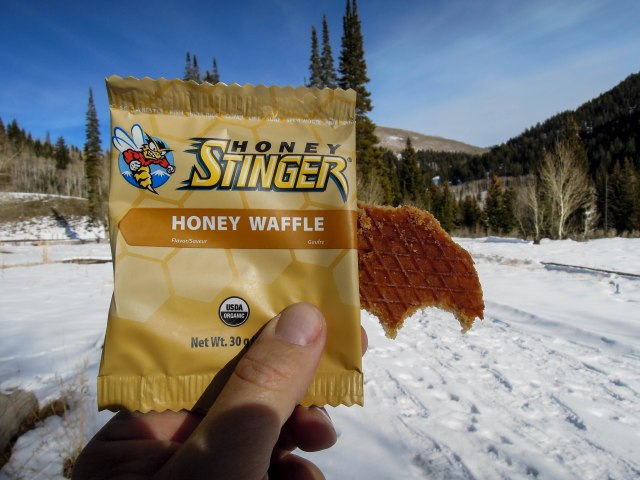 Probably the most delicious trail food

After the junction I followed some moose tracks that had tramped down the trail a bit, but it was pretty slow going. The snow was getting deeper as I continued up the canyon; several times my tires would wash out in the deep snow and I would have to walk a bit. It was really tiring breaking trail through the deepening snow. 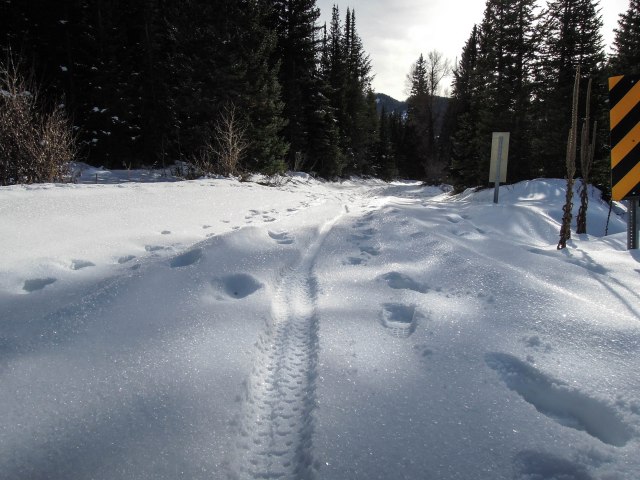 Harder than it looks

Just after a stream crossing, I arrived at an area of late 19th Century and early 20th Century mines. This was a reclamation area where the government had come in to clean up the hard rock tailings that were polluting the streams. I also learned from the signs that there had once been a mining town called Forest City located at Dutchman’s Flat. 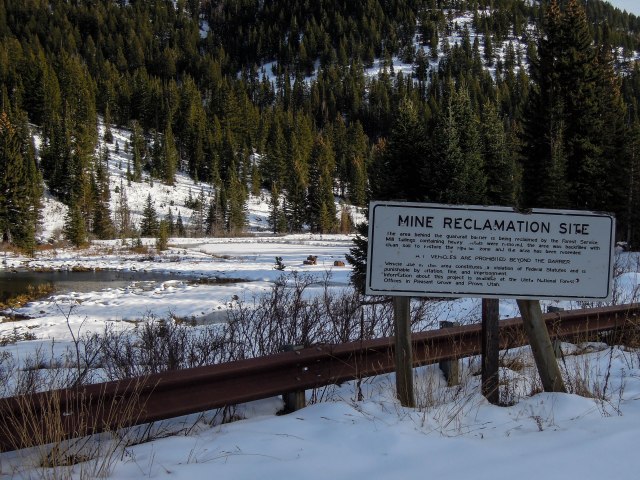 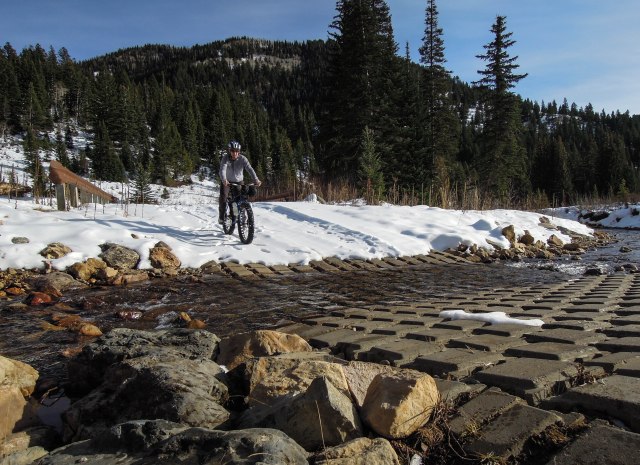 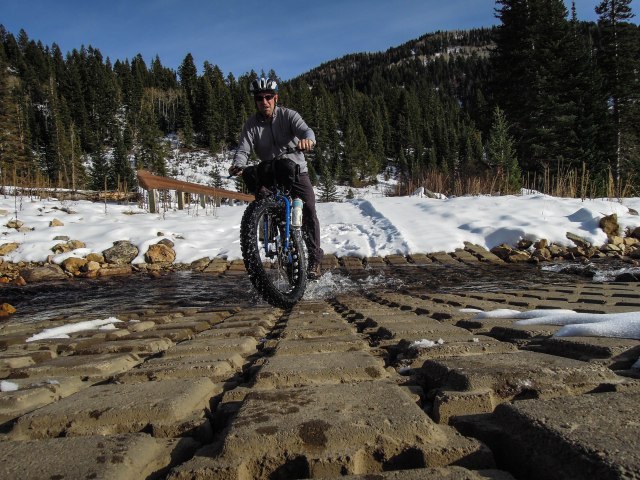 The snow was pretty deep and I was floundering. But I also wanted to at least get to the Pittsburg Lake trailhead. So I began hiking up the narrow road, pushing my bike. After 3/4 of a mile or so, I was getting tired and decided to turn around. I was also getting a bit cold as I was in a deep canyon where the sun did not shine. Actually the south facing side of the canyon was snow free, while the north facing side, in the shade, was full of snow. I think I actually got to the trailhead (checking on a map later), but because there was so much snow I couldn’t really tell where the turn-off was. 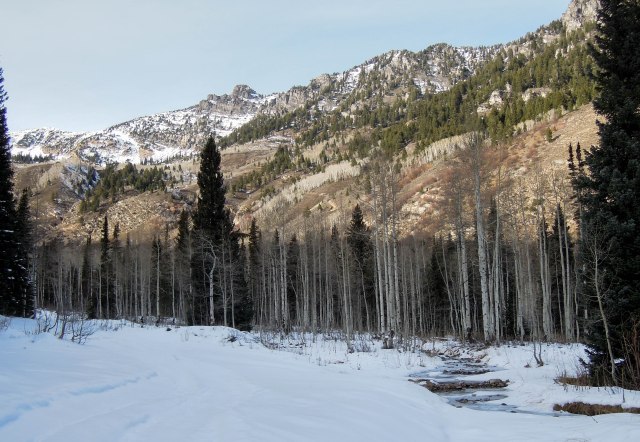 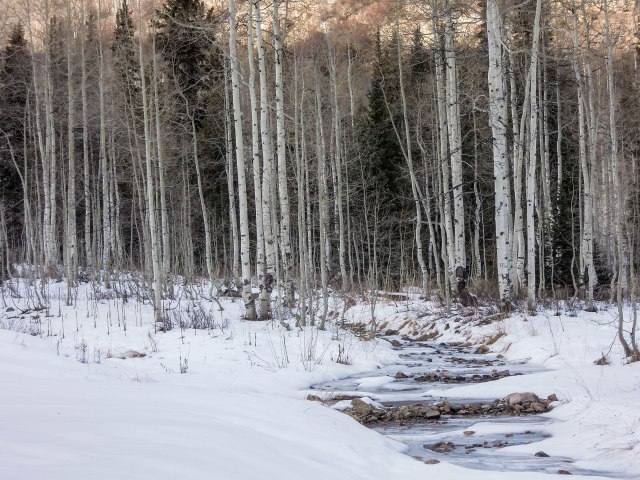 Aspens and a partially frozen stream

I was expecting to be able to cruise down the trail and not have to walk. This only partially worked. I’d head down pedaling and coasting, then hit deep snow, wash out, wallow around, then jump off the bike and walk. When I got back to the creek crossing I was able to ride down the rest of the way. Just below Dutchman’s Flat I ran into another fat biker on his way up. He was riding a new, last year’s, aluminum Beargrease. He was having a good time, and was grateful for my tracks to follow in. 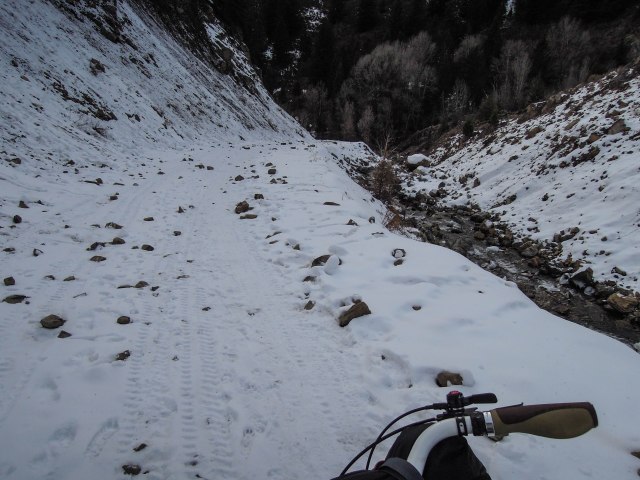 It was chilly riding down the canyon and I made good time. It was a nice ride, but pretty tiring breaking trail. I’m really looking forward to riding some packed out trails. I used to curse the snowmobiles when I was cruising along on my backcountry skis, but now it will be nice to have a packed out trail. I remembered to start my Strava on my phone this time and according to it I rode 13.4 miles climbing 1,555 feet. My riding time was a sluggish 2:48.