We got up a little earlier on Day 3, intent on heading into McCall for breakfast. We packed up quickly, ate a bar, and headed down out of the mountains. After a few miles we passed Little Payette Lake, then rolled into the outskirts of McCall, about ten miles from our campsite.

We rode through a subdivision of very large and expensive cabins on the shores of and near Payette Lake. On day one we met a forest service worker along the road. They were blasting some dead trees that were close to the road and they had the road blocked for about a half hour so we chatted with him about McCall, where he is from. He recommended a few restaurants for breakfast. After rolling into downtown McCall we rode about a mile to a place called Ruby’s Kitchen, a farm to table place right across the street from the lake. It was nice to sit down in comfortable chairs. We charged our phones, checked in with those at home, and enjoyed a delicious breakfast. 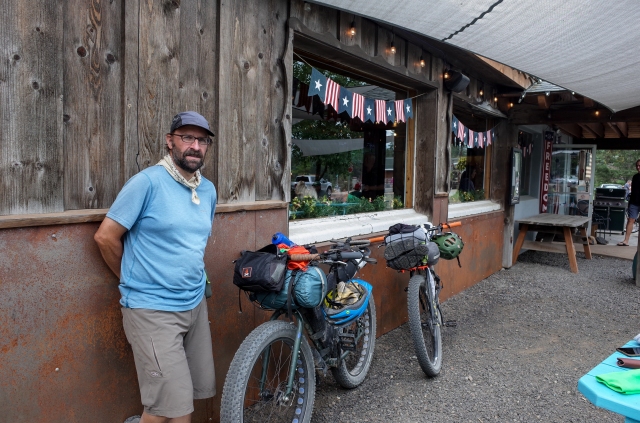 We spent about an hour and a half in town, a bit longer than we expected, but no big deal. Our goal was the town of Cascade for the night, another fifty miles. We still had about 15 miles of country roads before we headed back into the mountains. The riding was pleasant passing farms and ranches.

We took a break in the tiny town of Roseberry, where there was a general store, but unfortunately it was closed. We had planned to refill our bottles there.

From here we turned onto a dirt road, then another. The ranches became fewer and far between, until finally we began climbing up a winding road back into the mountains.

After a few miles we arrived at Gold Fork Hot Springs. This was a commercial property  that charged to use the hot springs. The pools were terraced concrete and they were full of people. We decided not to stop. We were more interested in a more rustic and remote soaking experience. After filtering water from Gold Fork River along the road, we continued on. The climbing became quite steep and sustained, climbing higher and higher into the pine forests. The main climb of the day was about 9 miles, gaining 1550′. Fortunately the pine forests we were traveling through were dense and beautiful and provided some shade. 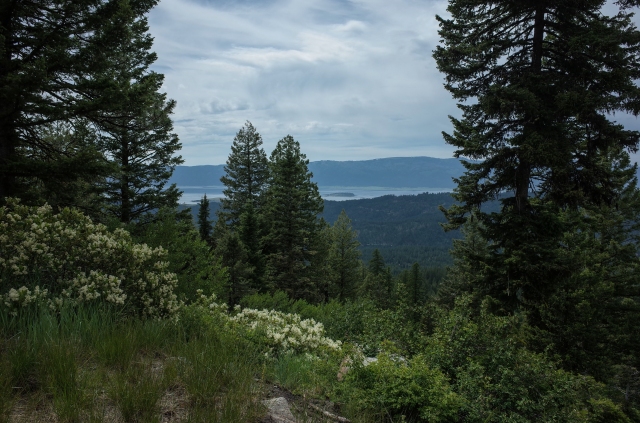 Lake Cascade, our destination for the day.

We had a serious descent out of the mountains down to Cascade and the lake, 1800′ in 10 miles. The riding was fast and fun, but you had to be careful and vigilante because sometimes the dirt and gravel got loose or chunky. The dirt road emptied us onto the paved Warm Lake Highway which we coasted down (mostly) into town. We stopped at a gas station and got some snacks then rode about a mile up over a short hill to a campground on the lake. It was not the kind of campground we prefer, as this one was full of RV’s and there was no privacy, but we were tired and ready to stop for the day. And there was a nice swimming beach a hundred yards from our camp. 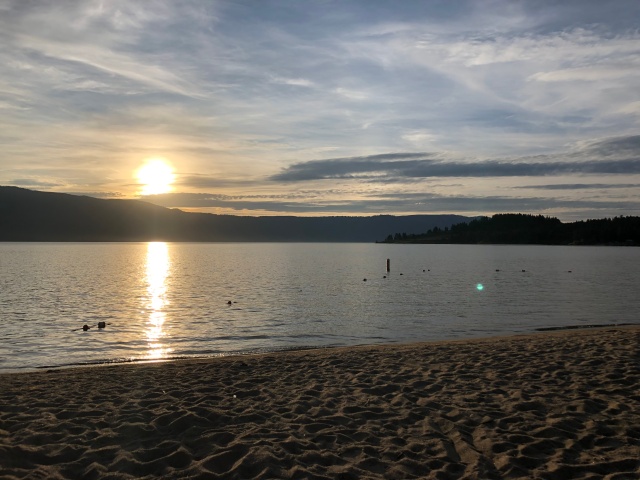 After setting up camp, we went down for a swim in the lake. It was cold and refreshing. We hung out on some rocks just enjoying the cool water and the nice scenery. Then back to camp, prepared and ate dinner, checked in again with those at home, then went to bed. I think Day 3 was a record distance for both Jason and Harrison.

The week started out cool and comfortable, but was heating up with each day, especially when we would descend down into the valleys. We packed up, skipped breakfast and headed into town to eat. We ate at a small local diner called The Whistlestop Cafe. The food was simple and good, eggs, over medium, sausage, homemade biscuit, and hash browns. It was a nice relaxing meal, but we were feeling pretty full. It was a lot more food than our typical oatmeal or dried fruit and energy bar breakfasts. 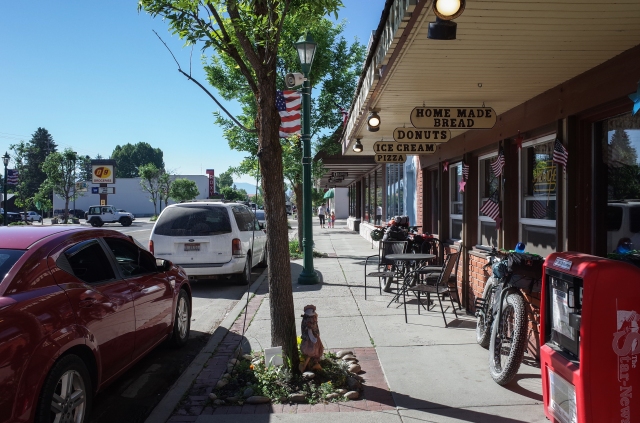 We had a nice ride along the lake for several miles before hitting dirt roads past more ranches and farms. It was very pretty country and we were enjoying the riding. 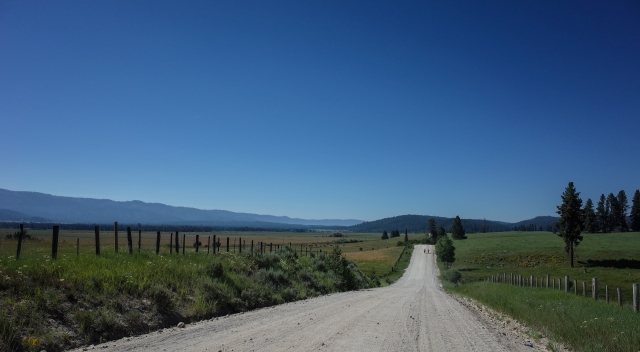 Before we even left town it was already quite warm. After about 10 miles we stopped at a little country store and gas station and got some ice cream and took a break. Then it was off into the mountains again. The climbing was quite steep in places and sustained, and it was hot. 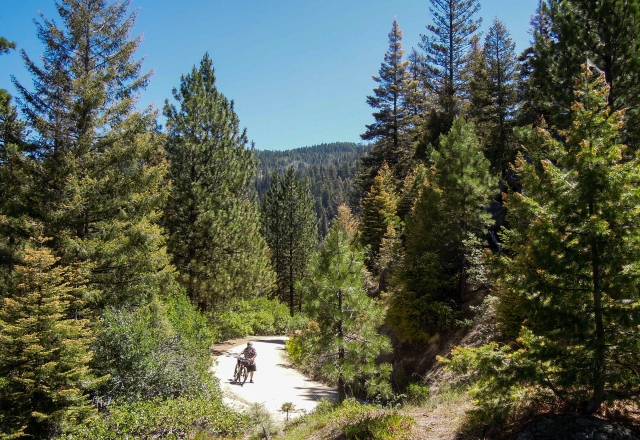 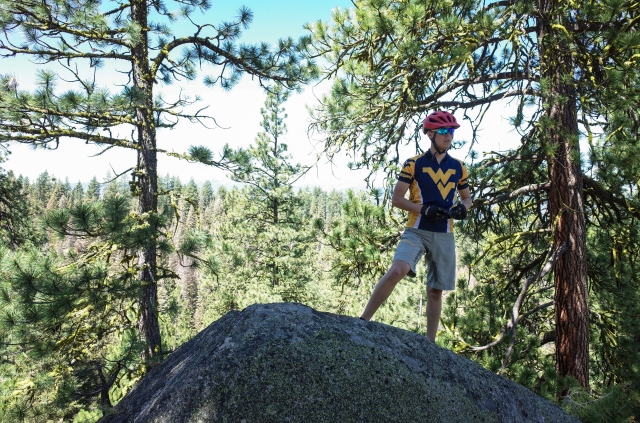 We also ran into a minor navigation issue. At one point we reached a saddle after considerable climbing. The paper ACA map said to go straight ahead, but the route I had mapped on ridewithgps.com, said to turn right, so we did, but the road got very steep and narrow, and it just didn’t seem like the obvious way to go. We backtracked and consulted the maps again, and eventually decided to follow the instructions on the paper map. After a short downhill section we turned a corner and the other road that we didn’t take, converged with the road we did. I felt better now that we were back on the route I had mapped.

Once again we had a nice fast, long, downhill run before hitting a wide graded road and a few uphill miles to Boiling Springs Campground, along the banks of the Middle Fork of the Payette River. The day turned out to be more challenging than we anticipated. There was more climbing, it was steeper, and it was hotter. We were glad to arrive at the campground, and it was a really nice one—tall shady trees, flat spots for the tent, a nice creek just a few yards off, and hot springs only a quarter mile away.

After setting up camp, we went in search of hot springs. There is actually a cabin for rent right next to the Boiling Hot Springs. The springs were really hot, exposed to the afternoon sun, and not very deep. We wandered down to the river and swam a bit, walked in the water downstream, and came across where the hot springs water enters the river. There were some pools built up, and the soaking here was just what we were looking for. It was a beautiful spot to relax in the hot or cold water. We were actually in and out of the hot and cold water. 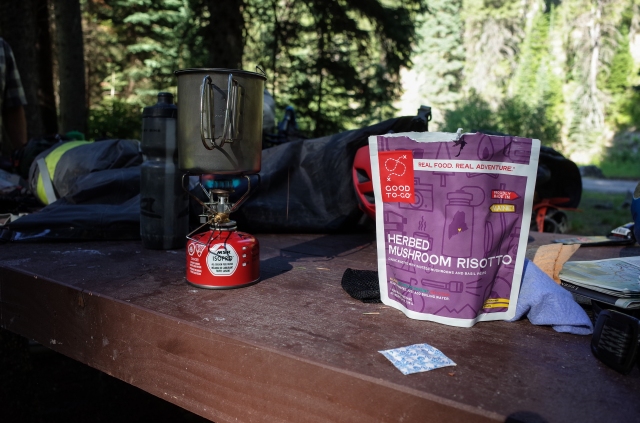 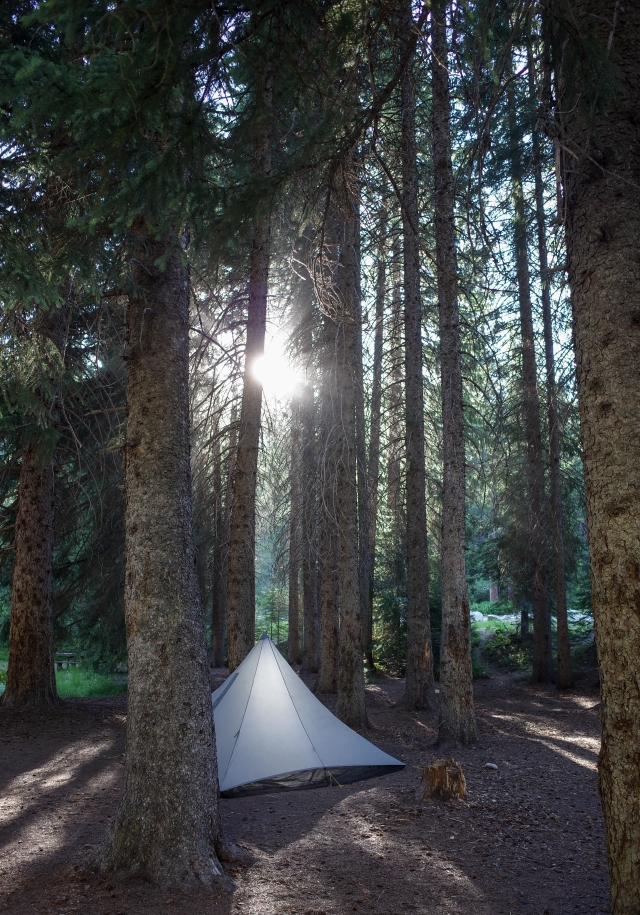 One more day, two more climbs. The day began almost immediately with the first climb, five miles and 1500′. The forests were dense so lots of shade. We topped out at a saddle and took a short break. 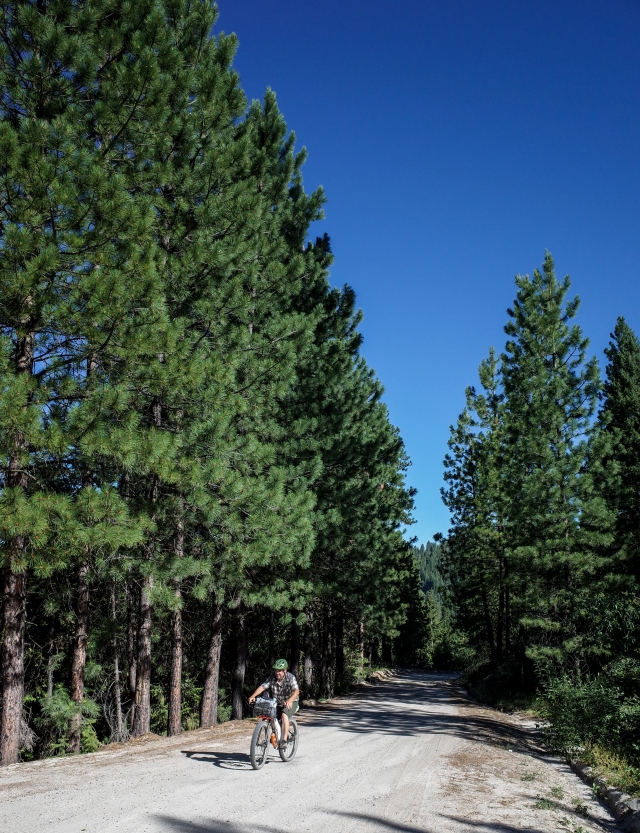 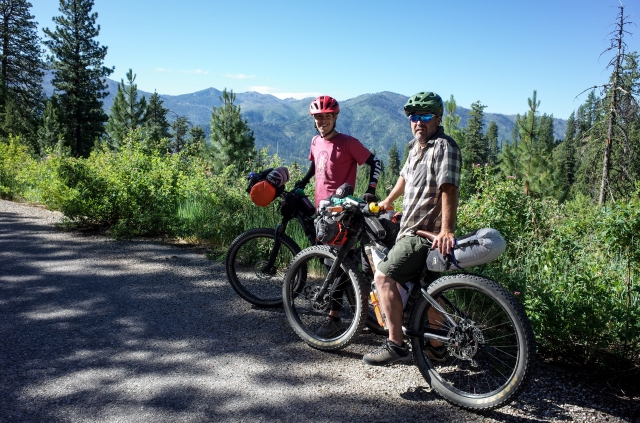 We then descended down into a new drainage. It was very steep, so steep in places that it was paved for a mile or so and we bombed down it all the way to Silver Creek Campground where we refilled out bottles. Shortly after leaving the campground the second climb of the day began. This one was four miles gaining 500′. It felt good to top out on the last climb of the day, of the trip (still lots of rollers, but the last significant climb). 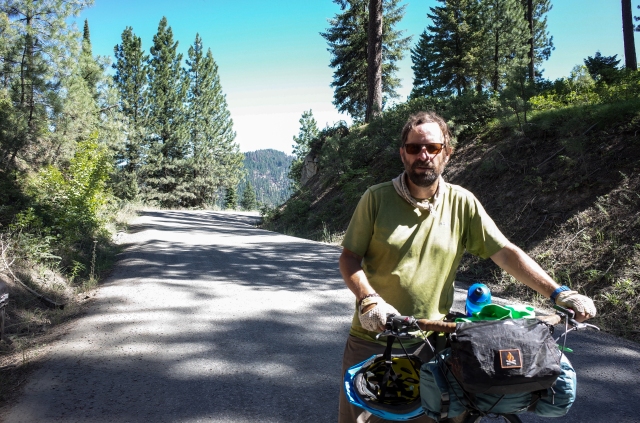 Top of the last climb of the day, and trip 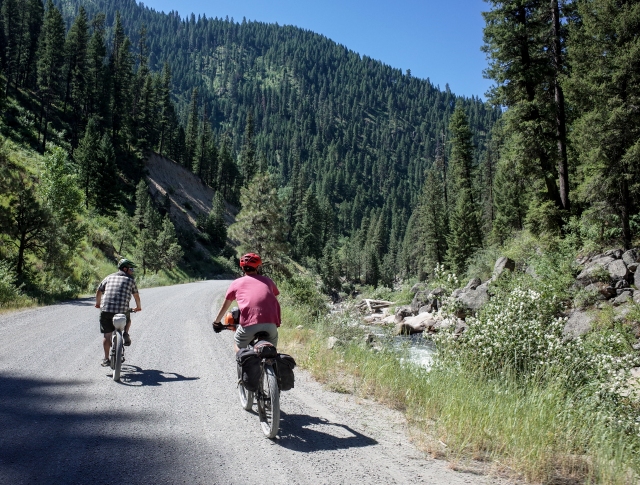 More fast downhill. Lower down we rejoined the Middle Fork of the Payette River. As soon as we left National Forest land, the cabins appeared, all along the banks and up the hillsides. The lower we rode into the valley, the hotter it got, and the paved road seemed to go on forever. We finally topped the last rise and coasted into the small town of Crouch at 1:00 pm, and it was in the 90’s. We headed straight to the grocery store and bought deli sandwiches and drinks. We relaxed outside in the shade eating and drinking until my friend Mike picked us up at 4:00 pm.

It was a great ride. We felt really good about our efforts, pace, etc. We had no mechanical issues, only minimal physical issues, the weather was good (warm, but not stormy), and the scenery was spectacular. Maybe next year we’ll go back and do the southern end of the loop.

My nephew asked me, “whatever happened to the Fatbike Brigade.” Well, I’m still around and just as active as I’ve always been. Jason (aka Bullet) bought a Salsa Timberjack (mid fat) a couple years ago and rides that for everything off road except snow. For snow he’s still riding his Trek Farley. Doc hasn’t ridden with us since our attempt on Kokopelli’s Trail. Hopefully he’ll rejoin us someday. 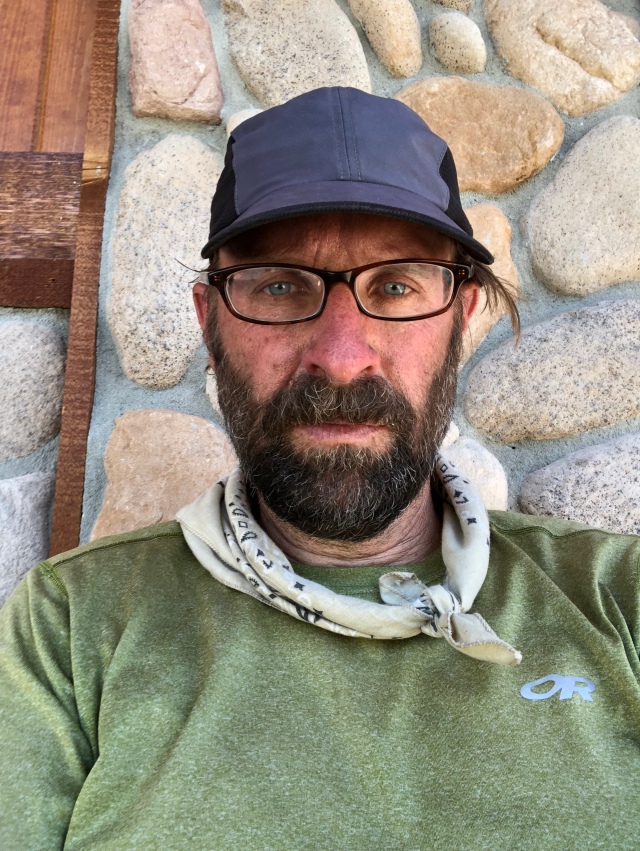