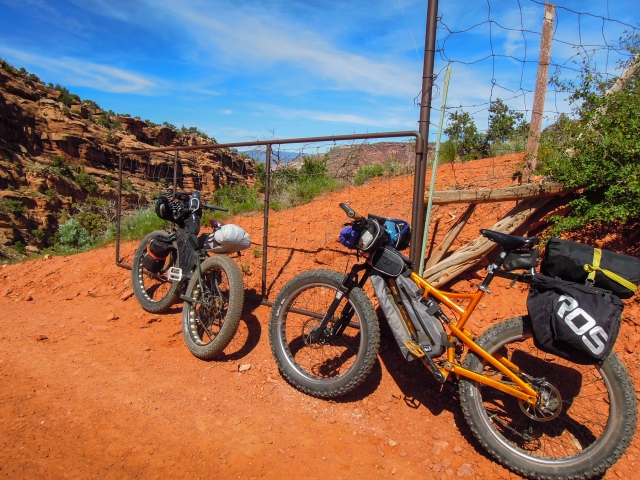 Day 3: On to Fisher Valley

After two days, we were 79 miles into this ride and had climbed about 8,000 feet over some pretty technical and rough terrain, and we were feeling it. In fact, we all admitted that this was tougher than we anticipated. There was nothing too technical or too difficult about any single section of the trail that we had ridden, but when you put it all together, it takes its toll on you. We had started with five riders and were down to four. On the morning of day three, Doc announced that he was having a hard time recovering from the previous two days. He didn’t sleep well, feeling queasy, unrested, and still tired in the morning. He decided to off load his gear to the jeep and continue riding with us, but was not too confident he would continue on. Jess, Bullet, and I were a bit worn, but still feeling relatively good and anxious to continue on. At the same time, we were beginning to wonder if we had bitten off more than we could chew. 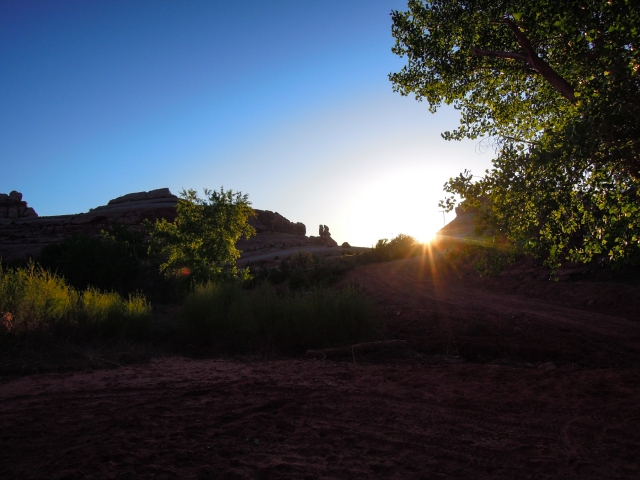 It was a beautiful morning in the desert. Smooth red and tan cliffs and slickrock was all around us. It looked like classic Moab desert terrain. The wide graded Entrada Bluff Road continued its steady climb up through the cliffs. 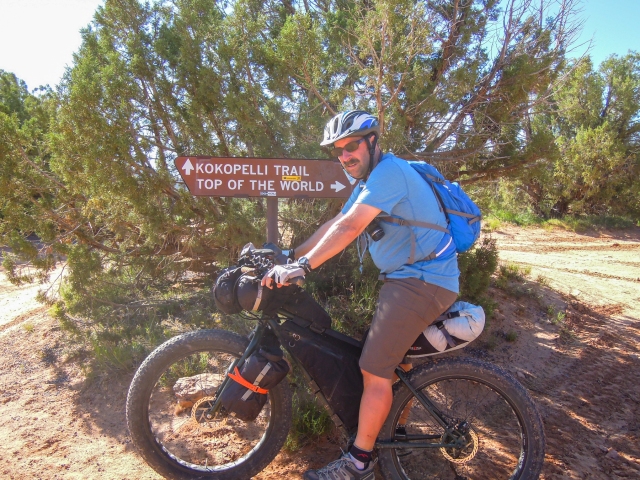 At a Junction near Cowskin Campground

After about 3-4 miles we arrived at what was supposed to be Cowskin Campground. We looked all around but didn’t see any campgrounds around, though we didn’t venture too far out of the way. We were glad we camped where we did, as it was pretty stiff, steady climbing up to this point. We continued to climb steadily for several more miles. It was hard to see where we were going as there were no wide open long vistas. We would slowly climb to the top of a ridge we could see in the distance, then descend a bit, only to climb to the top of the next ridge. It was also noticeable warmer than the previous two days. 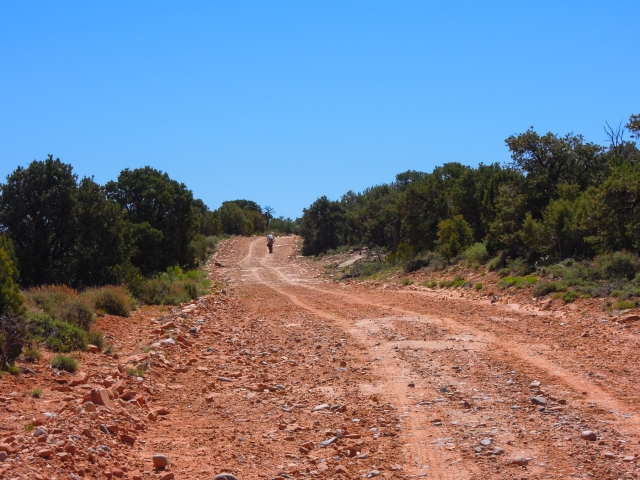 Jess up ahead on one of the long climbs 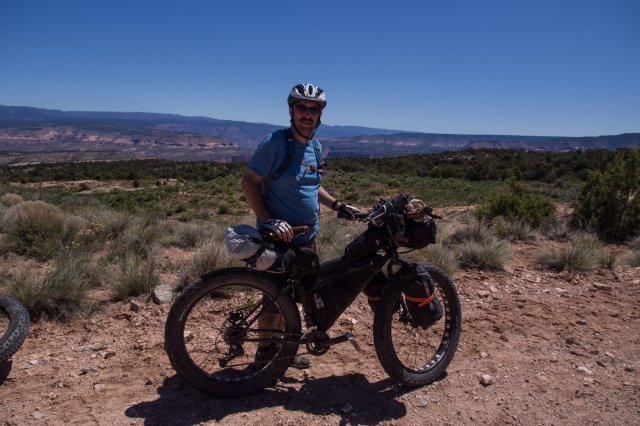 After topping out and getting ready to descend into Cottonwood Canyon

After topping out on one of these ridges we had a nice descent deep into the shaded red rock Cottonwood Canyon. Near the bottom of the canyon, our trail turned off and ascended a very steep, rocky, chunky track back up to the rim. This made for some stiff hike-a-bike.

Pushing up out of Cottonwood Canyon

Once on top we traversed around a bluff then began a rugged descent down a blocky, rocky track that eventually led to the top of Rose Garden Hill, a well known 4 wheeler climb. Along the way, we ran into a lone cowboy herding a group of about 50 head of cattle off a cliffy peninsula. Watching him work in the heat, on horseback, in this remote and rugged terrain reminded us that we were wimpy city guys. At the top of Rose Garden Hill we took a break and chatted with a group of 4 wheelers from Southern California. 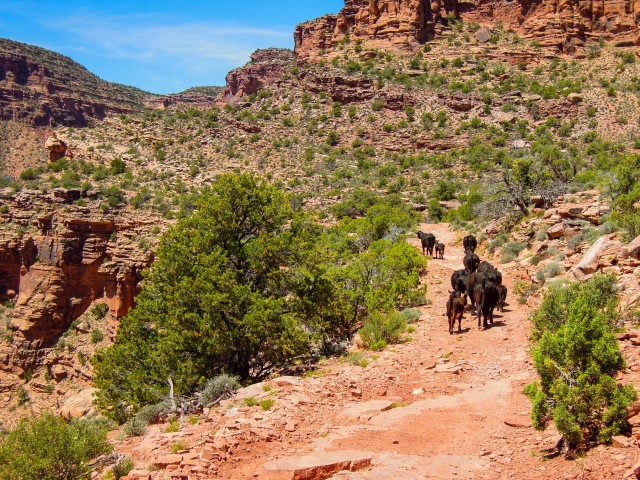 Cows in the trail just before Rose Garden Hill

I broke out some of my carefully rationed salami and cheese and thoroughly enjoyed eating real food, a nice change from bars, gels, and nuts. We then walked our bikes down the rough hill. Jess, who had been here before, told us that if we knew the line you could probably ride it, but without knowing it was rough, with several 3-4′ ledges. I’m always surprised at what they take four wheelers up and down in the desert. At the bottom we had another long, steep climb that we mostly pushed up to get to a saddle before dropping into the verdant Fisher Valley.

Four wheelers heading down Rose Garden Hill, with our route climbing up the other side of the valley 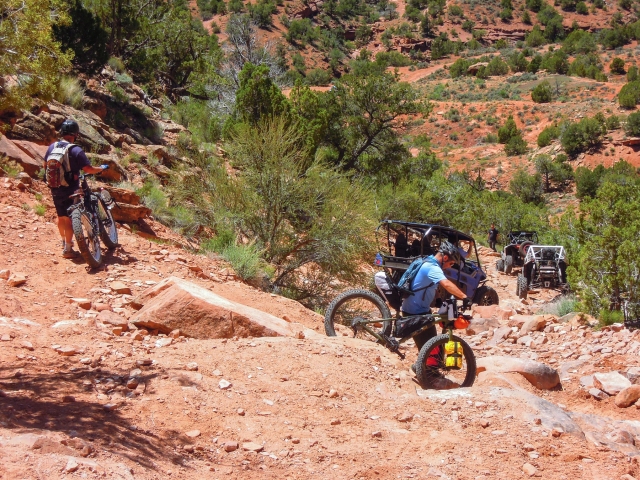 Foreground: the bottom of Rose Garden Hill; the route heads up to the saddle to the left before dropping into Fisher Valley. The ridge in the distance separates Fisher and Castle Valleys.

Somewhere along the way, Doc had decided that he had had enough and was bailing as soon as we could meet up with the jeep again. He was pretty spent. On the climb up out of Rose Garden, Boyd came along in the jeep and picked up Doc and his bike. We had a nice flowing descent into the valley where we had a pow-wow and how to proceed from here.

Fisher Valley—like an oasis in the valley, except there isn’t any available water 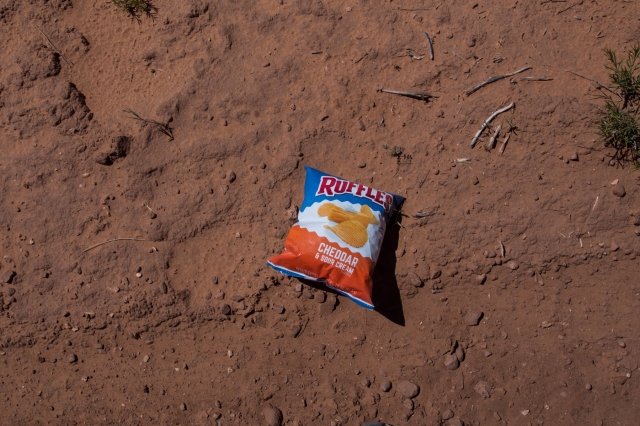 On the way down into the valley I passed this and couldn’t resist the promise of salt. Manna.

Once into the valley, we pulled out the maps and discussed our situation. We were only 18 miles into our day and had planned an additional 22 to get to where we planned to camp, at Rock Castle Campground in Castle Valley. The problem was that is was already midafternoon, it was pretty warm, and we still had considerable climbing to get there. In fact, this is where the real climbing begins on Kokopelli’s Trail. We had already climbed about 3000′ that day, and still had a couple thousand feet more to go. And we were tired. We were down to three riders. We aren’t much on quitting what we set out to do, but we also know our limits. After some discussion, we decided to push on to Hideout Campround, only 3-4 miles further on, and camp there for the night. This would leave us with quite a lot of steep miles to finish which meant that we would probably have to take a fifth day. We rode through the tranquil valley on a wide, red dirt road. The road curved around a bluff then began climbing up Thompson Creek Road. After a steepish climb we topped out on a saddle and could see down into the narrow valley below. Boyd and Doc had gone on ahead to the campground. At this point, we weren’t too keen on dropping down this steep road into the unknown below. Our thinking was that if we were going to bail, which was a real possibility at this point, we didn’t want to descend into the next canyon only to have to turn around and climb back out (it turned out to be a 1000′ descent). None of us wanted to ride down there to find Boyd and Doc, so when a woman came along on an ATV, Jess convinced her to let him borrow the ATV to ride down and find the guys in the jeep. 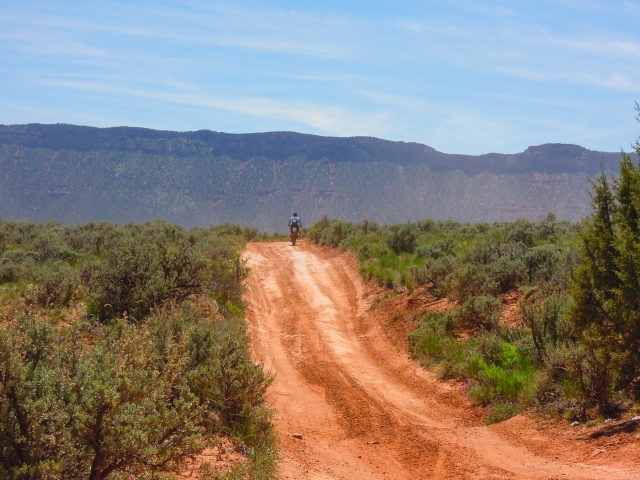 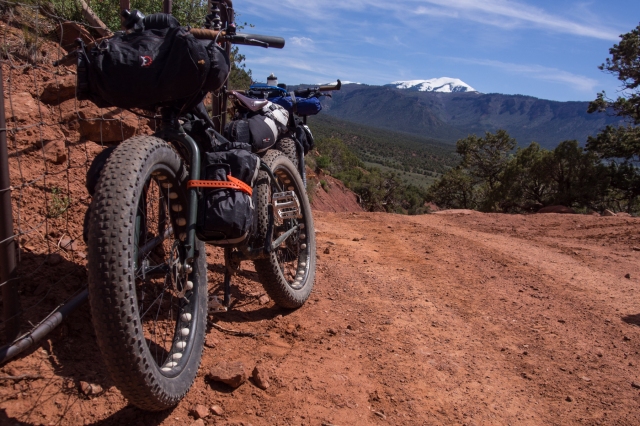 The saddle at the top of Thompson Canyon Road

Defeated. Road’s end for us. Fisher Valley below.

We were tired and running out of day, and had finally admitted that maybe this was a little too much. With thousands of feet still to climb, we were not confident we had it in us, even if we did take an extra day. We discussed several options, but the one that appealed most was to bail here and ride down Fisher Valley to the highway. We thought about spending the night in Moab, then riding Porcupine Ridge the next day with unencumbered bikes. We felt rather than limping along and finishing the ride in poor style would not be as good as bailing, and it would be better to come back another time to do it right, when we were better conditioned.

As we were preparing to descend back into Fisher Valley, we saw the Baltimore boys slowing climbing up toward us. We met and told them of our decision. They too were pretty wiped out and were depending on spring water at Hideout Campground ahead. It was taking longer than they had planned to do this route, and they were clearly pretty beat as well. Since we were bailing I gave them a bunch of my leftover food, for which they were really glad. 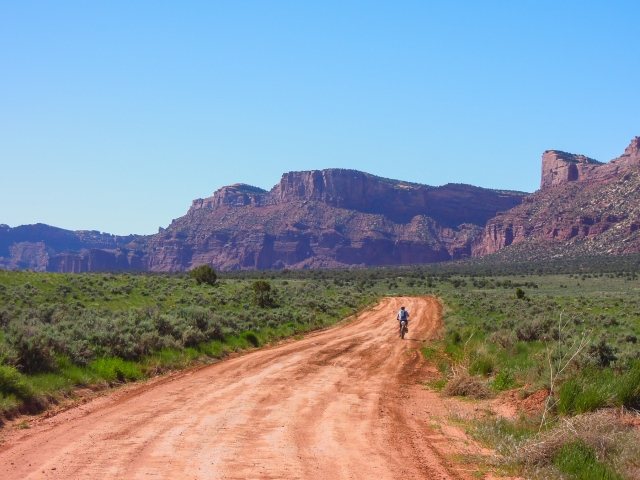 Heading out of Fisher Valley

The descent down Fisher Valley, through Onion Creek was a spectacular way to finish this epic ride. The scenery was as good or better than anything we had seen the previous three days. The road wound up and down, before descending down to the creek, then crossed the creek probably at least 15 times. It was very enjoyable riding and felt so good to be descending after climbing so much. We flew down with huge grins on our faces. 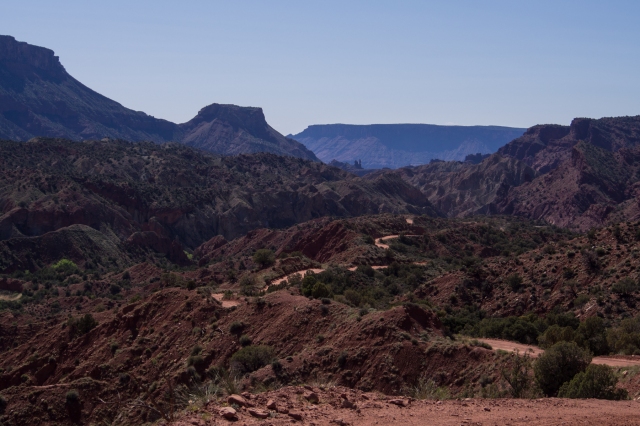 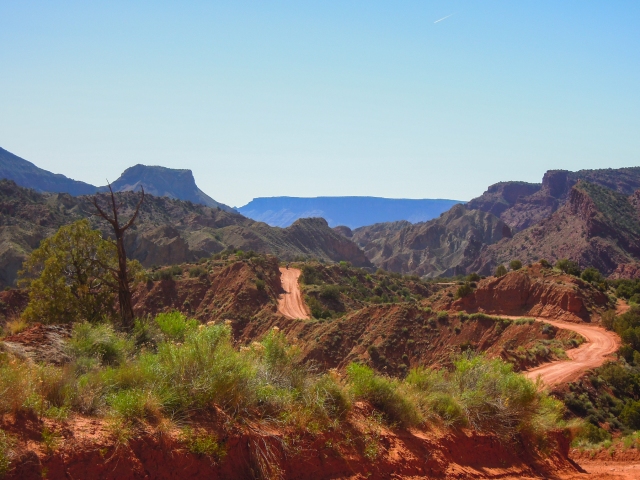 At the top of Fisher Valley, getting ready to descend 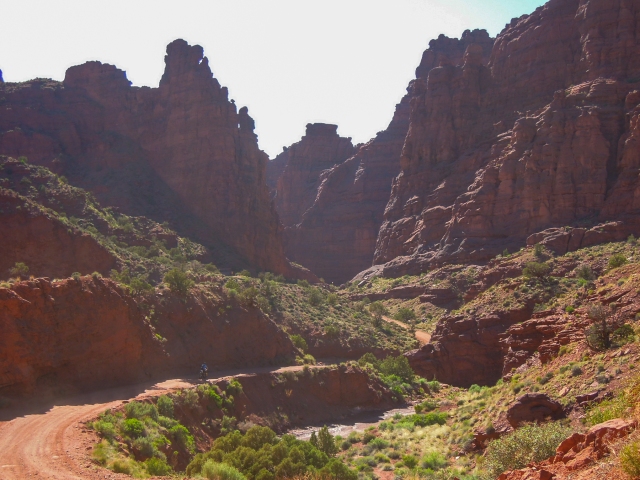 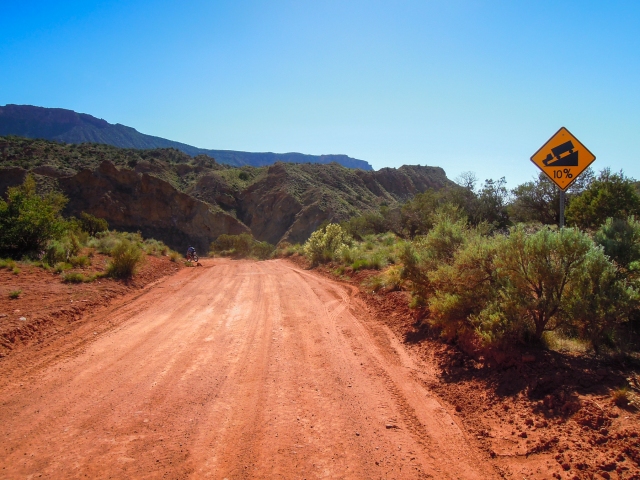 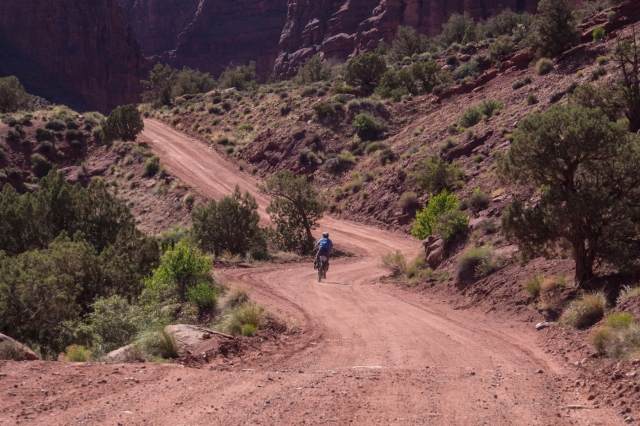 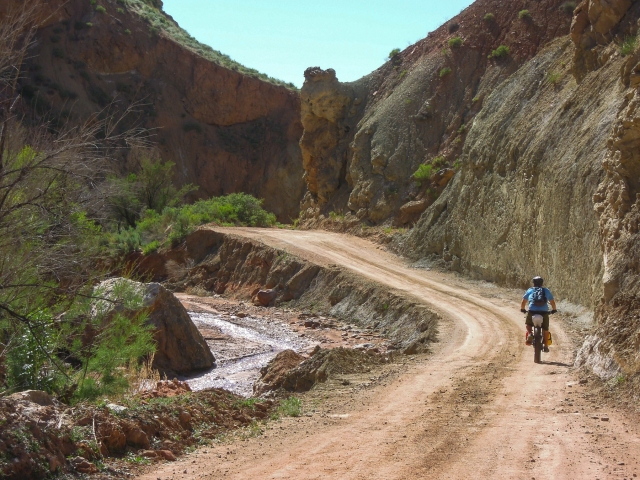 One of many creek crossings

Looking back at Fisher Canyon from the highway

Once we got down to Highway 128, we rode a few miles toward Moab until the truck came along to pick us up. We then went back to the Negro Bill Canyon trailhead to pick up the jeep and headed into Moab for dinner. We had burgers, etc. at Milt’s. Moab was a zoo with no vacancy in any of the motels or campgrounds, so we decided to just head back home, only about 3 hours away. We left a bit sad that we were not able to finish the route, but we felt good about what we accomplished for middle-aged, weekend warriors, with families and careers. The scenery was spectacular, the riding was challenging but fun, and it was great to be out in those open, quiet spaces for a few days. We really want to go back and finish the route, but will probably have to wait until Fall when things cool off. It’s already pretty hot down there. We highly recommend riding this route, but also caution that it is pretty intense. The bikepacking.com route description gives it an overall difficulty rating of 6.5 on a 10 scale, while they give the Moab Kane Creek route that we did last year a 5.5. In our opinion, the Kane Creek route was many times easier than Kokopelli’s Trail; if they say Kane Creek was a 5.5, then I would say Kokopelli’s is more like an 8.5. But I suppose it’s all relative. They also say that there is 15,189′ of elevation gain on Kokopelli’s, but according to our GPS, we had already climbed more than 12,000′ and according to our maps still had at least 6,000′ more to climb. For those contemplating this route, you need to be in good shape, carefully plan your water drops, and enjoy hours with your head down grinding up long climbs. But the rewards are pretty great.

Here is the Strava screenshot of day 3.