Wednesday night Bullet and I went up to Round Valley in Park City and did a wonderful night ride in the snow. It was our first snow ride of the season. Conditions were excellent with 2 inches of powder over the dirt trails. It was cold but a great ride and we covered 9 miles.

While some of you suckers were standing in lines or stuck in parking lots (i.e. Black Friday), we were enjoying the Uintas on our fatbikes. Doc, Bullet, Darin, and I arrived at Soapstone Basin around 10:30 am and 11 degree cold. We loaded up and headed up the Mirror Lake Highway.

It is not officially gated yet, but it isn’t plowed either. A couple four wheel drive trucks had driven up so it was packed out nicely. At Soapstone there was about 2 inches of snow and it got progressively deeper the higher we got. Riding conditions were outstanding and fast. An occasional truck would pass us, but no snowmobiles. It was dead quiet and peaceful with only the crunch and squeak of our tires on the snow. 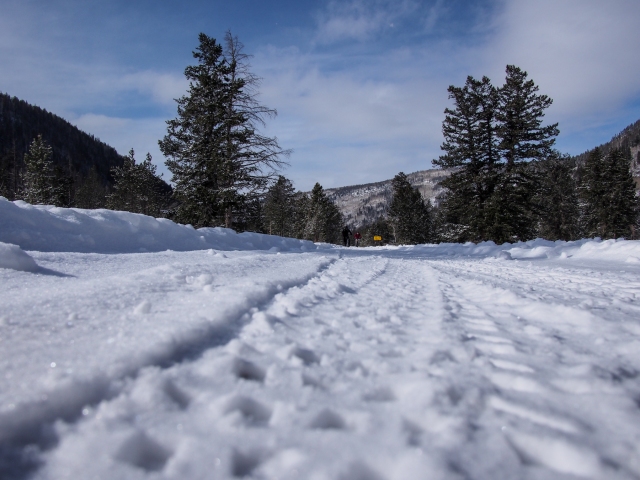 fat tracks in the snow

Doc on his Salsa Mukluk

It was quite cold as well, but as long as we were moving, and climbing, we stayed warm. When we stopped for breaks, we cooled off quickly. I brought a thermos full of spicy hot chocolate, made with whole milk, dark chocolate, cinnamon, and chili powder. It really hit the spot. 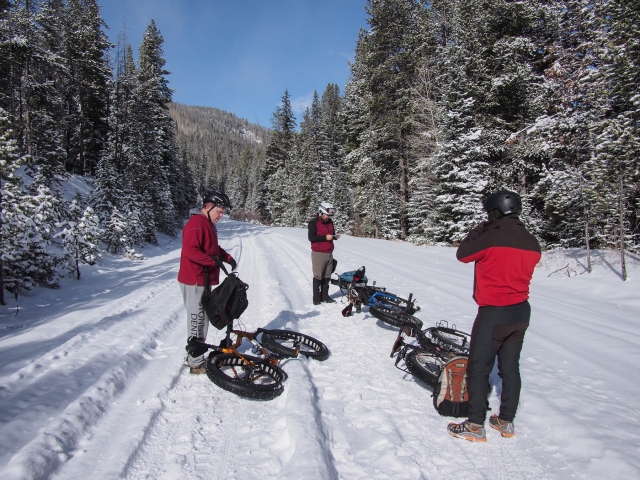 Part way up we decided to try out my bothy bag. This is an emergency shelter that is like a small floor-less, pole-less tent. In an emergency situation, like a big storm, or just to get out of the wind for a snack, two people put it over their head then sit down. The drawbacks are that for two big guys (i.e. fat), it’s a bit cramped in there and can be claustrophobic. When Doc and Bullet went in, they panicked and couldn’t get out, falling over in the process. Hearty laughing is a good way to stay warm. Then Doc and I got in to demonstrate how it works. I’ve had it for about three years and have only used it when taking a break to get out of the wind. I bring it cross country skiing or anytime I am out in the mountains for the day in Winter. It really does work and warms up inside really fast. You can also use trekking poles to hold it up.

Nice and warm, and a little steamy inside

The road tends to get steeper the higher you get, but it was enjoyable riding and we didn’t realize how much we had climbed until we started back down. Bullet and I rode up to Provo River Falls, nine miles one way. Doc and Darin turned back a mile or so earlier. It was beautiful up there, the pine trees covered in snow, and the silence was very unlike shopping. There was about 15 inches of snow up at the falls.

Turn around point for us 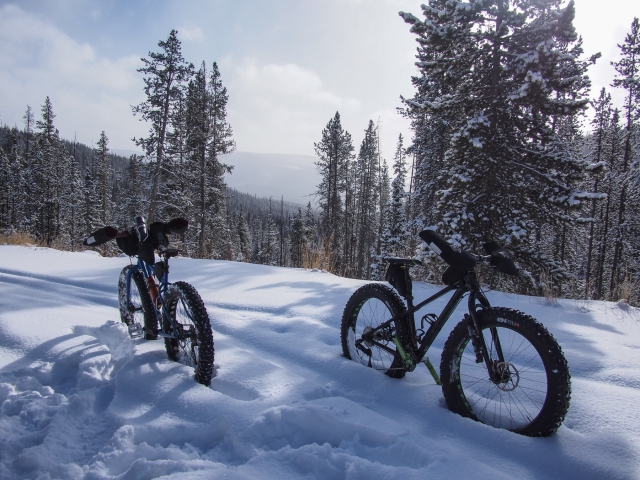 Looking back the way we came from the Provo River Falls parking lot.

The ride back down was cold, very cold. The temperatures never got above 17 degrees, and the hills were steeper and faster than they seemed when climbing up them. I had to stop and put on a warmer hat and face mask. Bullet and I are using Bar Mitts pogies this Winter, and we like them quite a bit. However, during the climbing I just wore a pair of thin liner gloves, but while descending, my hands were pretty cold. Next time I will have to put on heavier gloves for long descents. Though cold, it was a nice ride back down the canyon and we pushed it all the way to the end. Overall, we rode 18 miles with about 1600 feet of climbing.

Darin with icicles coming off his hair.

We’re hoping to ride all the way to Baldy Pass before the Winter is over. That will mean another six miles past where we stopped and another 1500 feet of climbing. It tops out at 10,715′. We topped out at 9343′. That would make for about 30 miles of riding, but we should be up to it with some more snow riding under our belts. We will have to pick a day with good conditions, as it can get loose and sloppy up there if it isn’t too cold, or if the trail is churned up by snowmobiles.