The second race in the Frosty Fat Bike Race Series was a night race at the Sundance ski resort Nordic Center. This is an area of groomed cross country ski trails just two miles up the road from the downhill resort. They allow fat bikes on the trails, as long as you have a trail pass. They were nice enough to allow a fat bike race at night. It was a chilly twenty degrees at race time, 6:00 pm. The course consisted of a three mile loop with a fair amount of climbing. Abominable A class did four laps, Bigfoot B class did three laps, and Chilly C class did two laps.

The course turned out to be fairly challenging as there were some fast downhills and the course at times was soft, then hard and icy. I think most everyone went down at least once and some guys crashed multiple times. For the A class racers, there were flat tires, broken spokes, wrong turns, and multiple crashes resulting in the favorites not ending up on the podium. In fact, none of the top three from the first race placed in the top three.

Despite the cold and the squirrelly track, everyone seemed to have a great time. It was a beautiful venue with a nice groomed trail through the aspens and pines.

Mad Dog Cycles had their mobile bike shop there and raffled off lots of goodies at the end of the race.

Photographing the race was pretty challenging—very low light and fast bicycles whizzing by. The best shots were probably at the start-finish area where there were more lights. Scroll down for the winners. First a video, then some photos:

Start of the A Class.

And more photos of the race here: 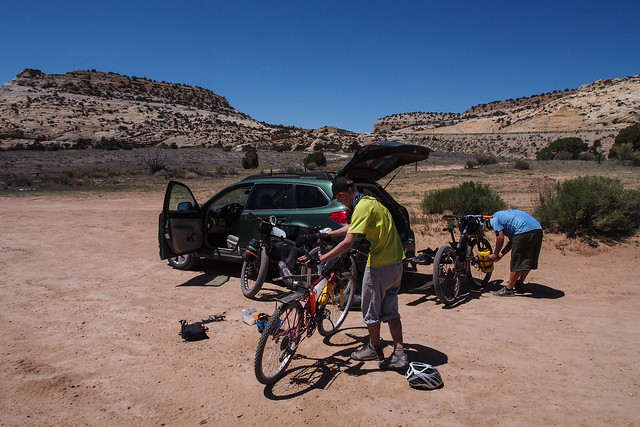