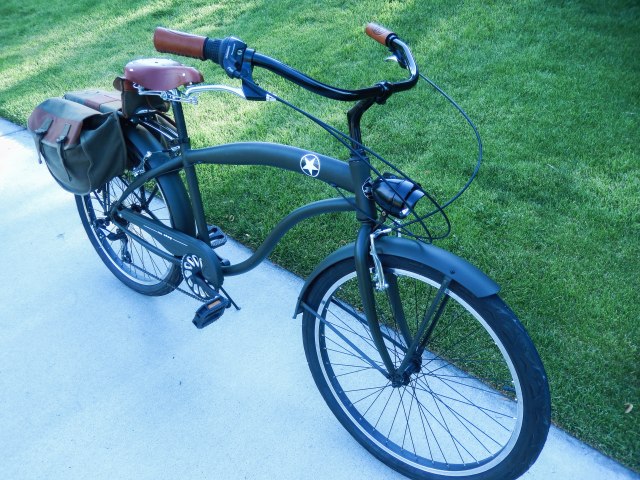 An article by Bullet.

I like bikes. If it has wheels and pedals, I’m interested. From early on in my life they granted me a sense of freedom and independence. My bike took to far off places with my friends. We rode through neighborhoods, dirt tracks and trail systems. Life was good.

When I was 14 I bought, what was then considered, my first fatbike. It was a well used Schwinn California Cruiser. The single speed drive train was perfect for the California Bay Area streets where we lived. It had a huge, spring-loaded seat that squeaked and bounced methodically as I pedaled. The bars were high and very wide giving me a sense of flying with my arms outstretched as I went down the road. It had giant whitewall tires giving it a sense of classic style. It was topped off with a hastily executed flat black, rattle can paint job. I’m not sure what the original color was or why it had been spray-painted, but I got it for $50 and wasn’t complaining. Looking back on it I’m not sure $50 was such a great deal for 1985.

I loved that bike. I rode it to school, work and to friends’ houses. My less fortunate friend that didn’t have the freedom of a bike would sit on the handlebars for a ride when we went to the store or arcade.

These fond memories were rekindled one day a year or so ago when I stumbled onto the jbikes.net website. A website littered with beach cruisers of every imaginable configuration and Schwinn Orange Crate style bikes with their awesome banana seats and Springer forks. I was giddy as I perused the pages. Then I saw it. A Greenline cruiser painted in a flat olive drab green with a white star on the top tube. It looked like the old Willies Jeeps from WWII. After all, if you’re going to have a sweet beach cruiser why not have a cool themed one.

After a little prodding, my wife gave me one for my birthday. Pretty great considering what I usually hear from her is “why do we need another bike?” Unlike my first cruiser from my early years, I had a mission for this one.

The standard single speed wasn’t going to cut it here in Utah so we went with the Shimano TourneyTX 7 speed with a grip shifter. It has unmarked basic V-brakes, aluminum frame, and the standard giant spring seat and wide sweeping handlebars expected on a beach cruiser. This was all standard on the model ordered. In working toward my vision for this bike I added a black rear rack and retro style bullet headlight, also in black.

Over the next several months I began to outfit the cruiser to look like it came right out of WWII. I installed the headlight and spray painted the rear rack in a flat OD green to match the rest of the bike. I needed some way of transporting stuff easily on the rear rack. After all this is to be my farmers’ market/summer festival ride. I thought a nice 50 caliber ammo can from a near by army surplus store would do the job. I could drill out the bottom and bolt it right to the rack. Yeah it would be heavy but this bike isn’t about performance. It’s about style and fun.

I was in the store a short time before I found acceptable ammo can and headed to the cashier. On my way to the front my eye caught a set of OD green canvas and leather saddlebags for $30. The ammo can went back and the bags came home with me.

The canvas was, as you would expect, pretty floppy. So I took some .09” ABS plastic I had and riveted in stiffeners to the backside of each bag that sets against the rack. The yoke was too wide for my little rack so I took the bags and the bike to a friend who has a leather shop in a nearby town. I work with Travis at Western Trade in Springville on a very regular basis with my own business so it is not unusual for us to bring each other little projects we need help with from time to time. Travis cut the middle out of the yoke, stitched it back together and mounted the bags on the bike. While the bike was there I had him custom fit leather grips on it. He had the great idea of stamping the leather with the old U.S. Cavalry insignia. He also used the piece of canvas he cutout of the saddlebag yoke to make a seat bag with the same insignia. It is a very nice touch that ties it all together nicely. 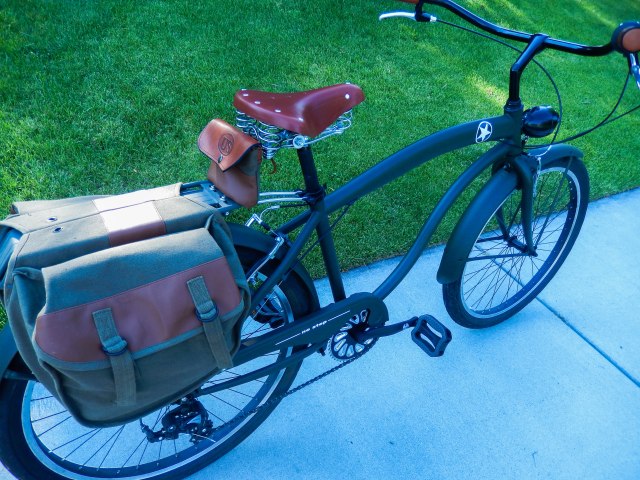 Canvas and leather saddlebags modified to fit the rack. And a custom seat bag.

The seat that came with it was really pretty miserable to ride on for more than a couple miles at best. It was just so wide it didn’t allow your legs to work properly. At this point is didn’t match the rest of the bike any way. I thought a Brooks saddle would tie everything in very well and be a huge improvement on the looks. I just couldn’t bring myself to spend the money on a Brooks. After all, the bike was only $250.00. A Brooks saddle is almost half of that. Instead I found a cheap knock off from China for $45 shipped. It fits the style I was going for but it is no Brooks. I may end up with the Brooks down the road any way. 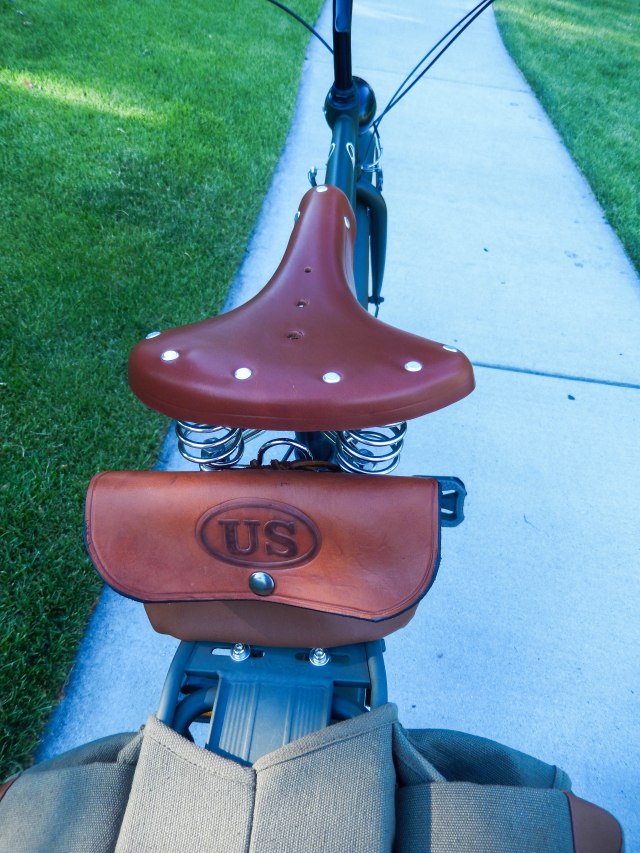 So there it is; my new WWII cruiser. I feel I should review the bike itself a bit here too. Though I haven’t weighed it, the aluminum frame makes it feel much lighter than it looks. The headlight is not high quality or bright enough to see by at night but would help to make you visible to others on the road. The rear rack had to be modified a bit by bending the connecting rods so they would line up with the seat clamp. The 7-speed is not geared very well for the hills. Rather, I think it was meant for more or less flat riding for someone who wants to get there faster. The rear cassette may get changed out at some point for some easier cruising gears. I may also change out the tires for something a little more classic but for now these will do just fine. 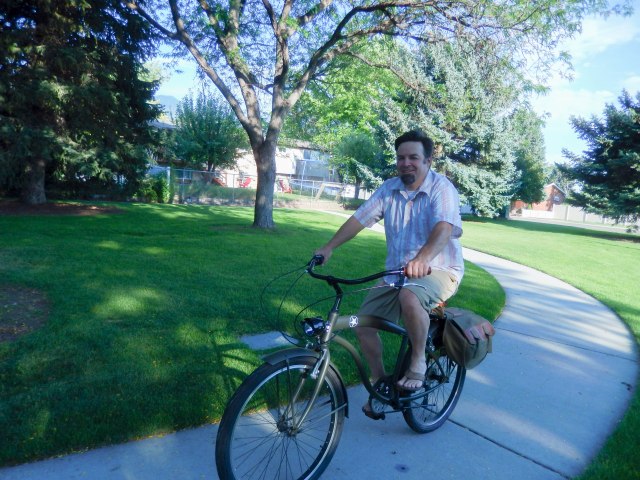 Bullet on his WWII beach cruiser.

I must admit I pretty much broke all my purchasing rules with this one. I purchased online rather than supporting my local bike shop and nearly every component was produce in a foreign country. But from the beginning this was a budget project focused more on style than quality and performance. A bit shallow minded, I know, but I was feeding off nostalgia. I do believe you get what you pay for and this project did not change my opinion on that. This bike and many of its components are cheap and will not last long-term continuous use well. It was meant to be an occasional rider that was fun and attracted attention. And for that purpose it is very well suited.

Although the beach cruiser is no longer fat by today’s standards it was definitely an icon of my childhood. They started as a fad but have withstood the test of time and are here to stay. New models are popping up in shops all over and I’m seeing a resurgence in their popularity. And like these early “fat bikes” the new fat bikes of today have caught the public’s attention. With more manufacturers announcing models every year I think it is safe to say that this is no fad either.