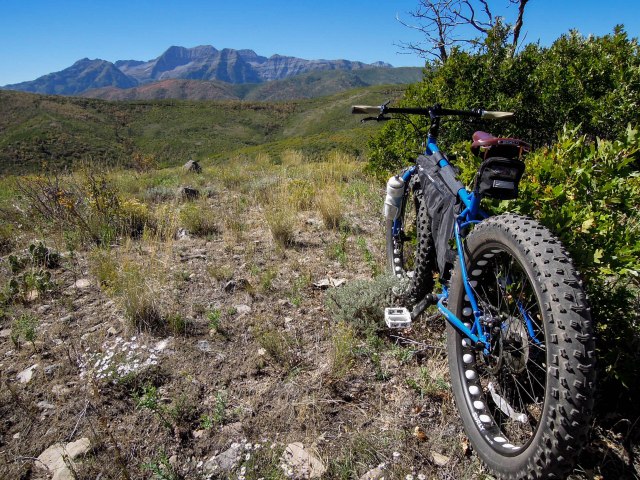 A ride report by the Prof.

Mt. Timpanogos in the background

A couple weeks ago I went on my first long ride on my Puglsey. I was in an exploratory mood. I often will take off (either trail running, hiking, or on a mountain bike), and follow a trail or what hints at a trail just to see where it goes. Sometimes it pays off and I find a great new route. More often they turn out to be miserable slogs that either go nowhere, or the rewards aren’t worth the effort.

On mapmyride I checked out some of the dirt roads that branch off from the bike path on the west side of Deer Creek Reservoir. Because I had been a little under the weather,  I  wanted to do something less technical where I could just ride and enjoy the scenery. I figured dirt roads that show up on Google Earth would be a fairly safe bet. So I picked out a dirt road that branched off the Deer Creek bike path between Provo and Heber City (UT).

I parked at the trailhead parking area at the Deer Creek Dam and took off on the smooth gravel bike path. I was using my frame pack on my Surly Pugsley and mounted the water bottle cages on the forks. After about one mile the path crosses the railroad tracks, and just past this,  a double track branches off to the left through the grass. The riding was pleasant as it wasn’t too steep. I figured there would be some steep spots but was not prepared for what I encountered higher up. 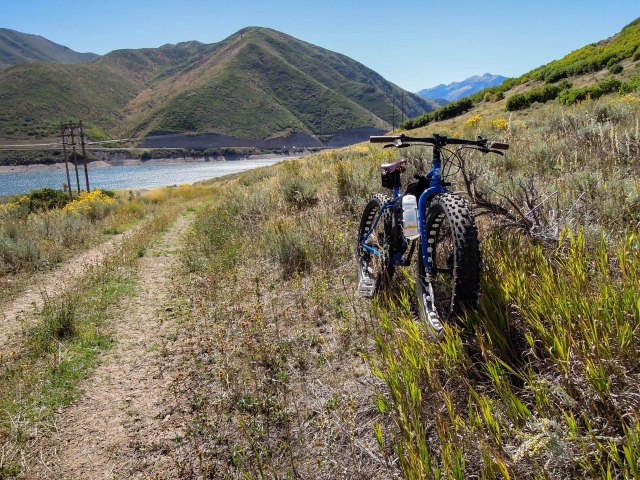 Looking up the road just after the turn off.

The road climbed gently up this canyon winding back and forth. The autumn colors were showing higher up and riding was still nice.

Looking back down on the lower part of the road.

After about 3/4 of a mile things started getting ugly. The road began to get steeper and steeper and more and more rocky. And not just little rocks, but baseball sized loose rocks on grades up to 16%. Needless to say I spent more than an hour pushing my bike higher and higher. There were two problems I faced. One, I was compelled to keep climbing because I certainly did not want to ride down this very loose, rocky, and steep ATV track. And two, I could see the top just up ahead. But as soon as I would get to the top, it would be a false summit and I could see the road winding higher to the next rounded summit. It was a bit maddening. I also have a really hard time turning around before reaching my destination. In this case, it was the Cascade Springs Road.

Nearly 3 miles of this was not very pleasant.

Getting to the “top”, then seeing this (4 times) was also not too fun. 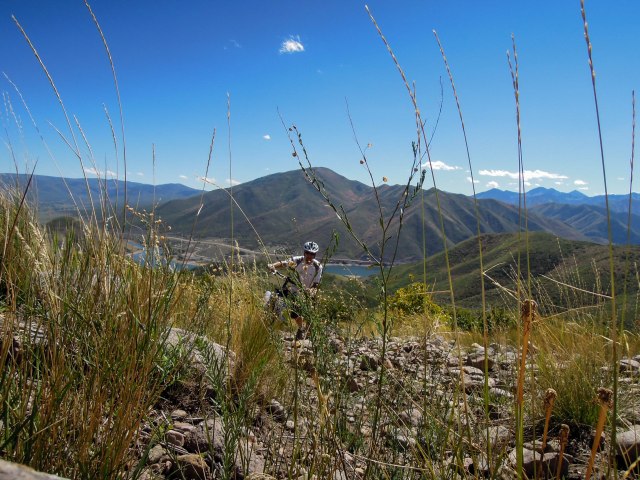 So I slogged for more than an hour until I finally did top out and could see the Cascade Springs Road down below on the other side.

Cascade Mtn. in the distance.

The town of Wallsburg far below.

I took a break at the top and ate a Mojo Bar and relaxed for a few minutes. The road down the other side started off very nice, smooth dirt, rolling up and down. Then there were some sections of very steep, heavily rutted, and rocky downhills. I took it easy and picked my way down these technical sections. MY Surly Nate tires ate everything up without flinching. I finally arrived at the Cascade Springs Road, which was graded dirt and gravel. I wasn’t sure if it would be paved or dirt as I had never been on this part of the road. I was glad it was dirt. I had two miles of pleasant downhill rolling on the road before I turned off on Decker Road. 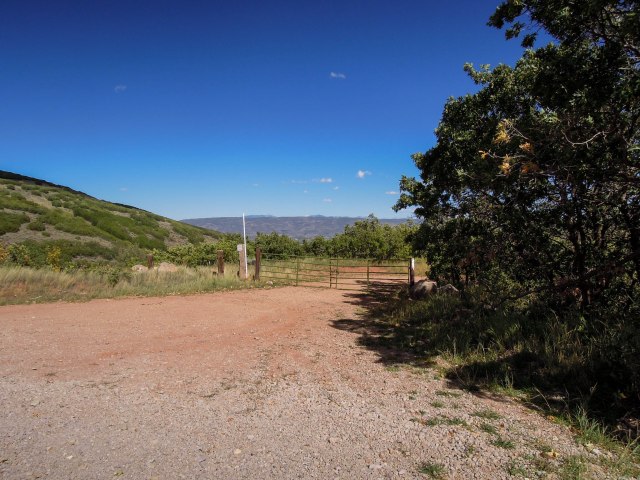 The turn off to Decker Road.

This road was marked on Google Earth as Decker Road. It was a stretch calling this a road as it was nothing more than a grassy double track through cow pastures. 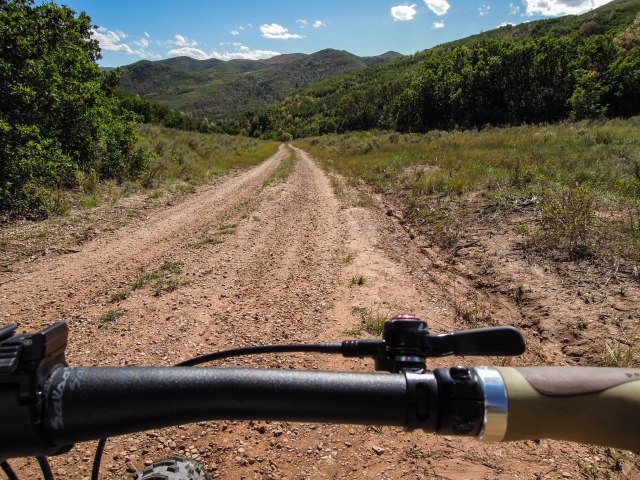 The beginning of Decker Road. It soon deteriorated into a grassy double track.

This was a really nice downhill run with smooth dirt and only occasional rocky sections. I flew down this road. At one point there was a gate to pass through. The sign said to keep the gate closed. No “no trespassing” signs anywhere. It’s nice to have access to places like this.

The second of three gates I had to pass through.

Near the bottom of the road there was a beautiful stand of trees that looked like it would make a nice place to camp. I detoured off the road to take a look. 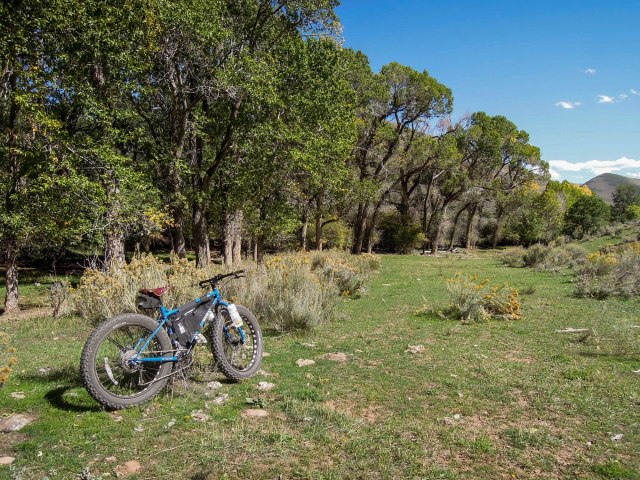 This would make a nice place to camp.

Just below this area I passed through one more gate that said something about motorized vehicles were not allowed and for “muscle powered users please close the gate.” A nice touch.

Looking back up the Decker Road area. Cascade Springs Road is the faint white line visible in the center of the photo.

I arrived back on the bike path about 4 miles from the dam. There is a sign next to the railroad tracks that says “Decker Bay” here. Because I had spent so much time walking I wanted to ride a bit more, so I headed north to the bench near the end of the trail and took another break. This is at the far end of Deer Creek Reservoir with views across the grassy shoreline to Charleston, Midway to the left, and Heber in the background. It was a pleasant place to rest. The wind was blowing and it was nice and cool.

I then turned around and rode the almost 7 miles back to the dam where my car was parked. Along the way I saw the famous Heber Creeper train passing along.

The path along the reservoir, looking south.

I don’t have a cyclometer on my fat bike, but piecing bits of this trail and dirt road together with mapmyride, I rode about 19 miles and was out for about 4.5 or 5 hours. It was certainly more than I was anticipating, but overall it wasn’t too bad.  I don’t think I can recommend riding (pushing your bike) up that first road, but the ride down Decker Road was very nice, albeit only about 3.5 miles. Perhaps the better loop would be to take the bike path all the way to the end near Soldier Hollow, then ride up the Cascade Springs Road a few miles, then descend down Decker Road.

When I was almost at the dam, I met a cyclist headed toward me. We chatted for a few minutes. He was loaded with panniers and sleeping gear. He had begun in Spanish Fork and was headed to Daniels Summit for the night. Then tomorrow planned to ride the dirt roads along Strawberry Ridge and down into Spanish Fork Canyon. That would make a nice two day ride.

The Surly Pugsley performed admirably. I could feel the extra weight climbing, but I could also climb steeper and looser stuff that I can on a regular mountain bike. The downhills were glorious with the beefy, heavily lugged Nate tires. I feel so much more confident on the downhills on my fat bike than on “skinny” 2.0″ tires. I really, really like this bike, and don’t think I will be riding anything else off-road for the foreseeable future.